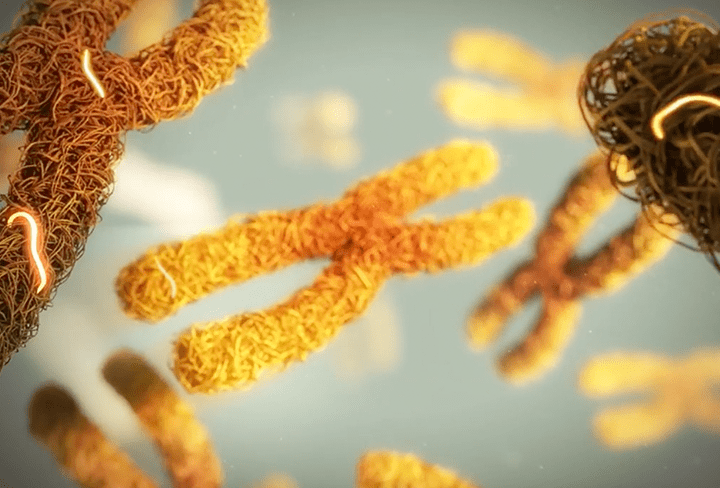 In a lecture at Amgen, Professor Amit V. Khera described how new genetic risk scores will help to find high-risk patients "who have been flying under the radar."

One day, you'll be able to take a simple blood test that will reveal your lifetime risk for developing a wide range of serious and preventable diseases. These insights will allow you to work with your doctor to craft a personal health strategy—the steps you can take to lower risks that might otherwise have caught you by surprise. And according to Dr. Amit Khera, this new day in healthcare is much closer than most people might realize. 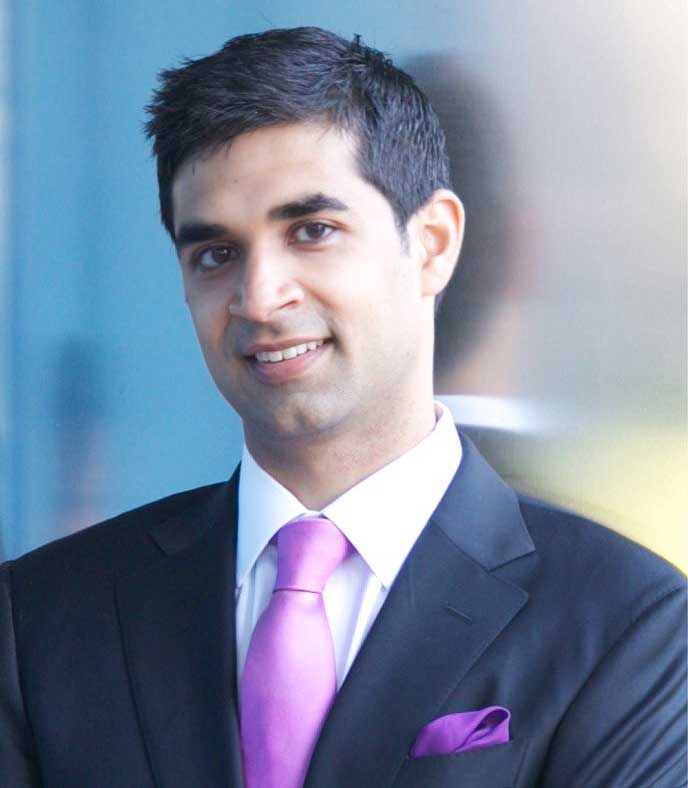 Dr. Amit Khera is a cardiologist at Massachusetts General Hospital (MGH) in Boston, group leader in the MGH Center for Genomic Medicine.

Dr. Khera is a cardiologist at Massachusetts General Hospital (MGH) in Boston, group leader in the MGH Center for Genomic Medicine, and associate director of the Cardiovascular Disease Initiative at the Broad Institute of MIT and Harvard. He is also "a luminary and an international leader in the genetics of cardiometabolic disease," said Saptarsi Haldar, a vice president in Amgen's Global Research group, who introduced Dr. Khera's lecture to Amgen staff on November 23.

"If you compare my DNA to yours, at 999 out of 1,000 sites our DNA is the same," Dr. Khera highlighted. "But the one-in-a-thousand differences can be very important for our risk of diseases. By focusing on these differences, we can identify individuals who are on very different trajectories for development of disease, achieving a key goal of precision medicine."

While genetic markers are already being used to find people at risk for certain diseases, "there are many high-risk individuals who are still flying under the radar," Dr. Khera said. That's largely because most current genetic tests are designed to detect rare types of genetic variants also known as monogenic risk—deleterious changes in the sequence of a single gene that perturb a specific pathway.

In heart disease, for example, rare genetic variants can allow for disaggregation, or sorting, of about 3% of affected individuals into discrete molecular subtypes. Some rare variants such as those in the gene for the LDL receptor can lead to very high LDL (‘bad') cholesterol, while others can cause elevated levels of triglycerides, a measure of circulating fat. Dr. Khera's research team identified a third molecular subtype, where risk is due to impaired nitric oxide signaling, leading to high blood pressure and platelet aggregation.

Rare variants are very important to the small number of people who carry them, and careful study of carriers can yield insights into disease biology that lead to new therapies. But in common conditions like heart disease, monogenic risk factors like those cited above account for just 3% to 4% of individuals with heart disease, Dr. Khera said.

"What about the remaining 97%? Can we identify additional high-risk individuals by using a new approach—a ‘polygenic' risk model?"

Polygenic means many genes, and a polygenic score calculates risk based on the collective effects of numerous common genetic variants in DNA—up to millions of variants in some cases. "Each gene in isolation may have a very small effect, but in aggregate their impact can be more substantial," said Dr. Khera. "Advances in computational biology now allow us to integrate information from all these genetic variants into a single number."

To simplify risk evaluation, Dr. Khera's team did analyses in which all individuals in the top 5% were considered to be "carriers" of a high polygenic risk for CAD, while the remaining 95% were considered noncarriers. "When we went back and looked at the genetics of heart disease patients in our hospital, it turned out that 17% of the people presenting with coronary disease are actually in this high polygenic score subtype. This subtype is much more common than the monogenic variants for heart disease, but the risk it conferred—more than triple the normal risk—was equivalent to what we say for those who carry rare monogenic variants."

The research Dr. Khera shared was of particular interest to Amgen, which has placed genomics and other "omics" technologies at the core of its R&D strategy. "In Amgen Research, we routinely leverage human genetic data to discover new drug targets," said Saptarsi. "However, the role of genetics in drug development doesn't just end there. Polygenic risk scores can help us enrich our clinical trials in a manner that makes the drug development process significantly more efficient, allowing us to more precisely identify which subsets of patients are most likely to benefit from a specific drug.

These high-risk individuals have been flying under the radar for a good reason: Their excess risk can't be detected by using standard tests to look for factors like high blood pressure or elevated LDL or triglycerides. "Their values for these traditional tests were only slightly higher than those of non-carriers," said Dr. Khera. "I wouldn't be able to identify these individuals in my clinical practice without access to genetic data."

Moreover, it turns out that even the risk conferred by rare single-gene mutations is also heavily influenced by polygenic risk scores. In a study of 13,000 individuals, those who carried a single-gene mutation that raised LDL cholesterol had, on average, a 3.2-fold higher risk for heart disease. But that risk ratio dropped to 1.3 in those who had a low polygenic risk score, and soared to 13 in those with a high polygenic score. "Having both a monogenic mutation and a high polygenic score is a genetic double whammy," Dr. Khera said.

There was good news from another study Dr. Khera shared. It showed that in individuals with high polygenic risk for heart disease, diet and exercise cut that risk in half. "These individuals can never do as well as those who had good genes and good lifestyles, but they were able to fully offset their high risk and get to the population average. This is quite useful in my clinical practice with respect to counseling these patients."

The potential usefulness of polygenic risks scores goes well beyond cardiovascular disease. Dr. Khera showed that the same basic approach could be used to identify individuals at high risk for obesity, fatty liver disease, diabetes, Alzheimer's disease, and breast cancer—virtually any disease in principle. Dr. Khera said that in every disease where polygenic scores have been calculated to date, "we see a really striking gradient and a subset of individuals who have three- to five-fold increased risk."

The research Dr. Khera shared was of particular interest to Amgen, which has placed genomics and other "omics" technologies at the core of its R&D strategy. "In Amgen Research, we routinely leverage human genetic data to discover new drug targets," said Saptarsi. "However, the role of genetics in drug development doesn't just end there.  Polygenic risk scores can help us enrich our clinical trials in a manner that makes the drug development process significantly more efficient, allowing us to more precisely identify which subsets of patients are most likely to benefit from a specific drug.

"We envision that human genetics and other omics technologies such as proteomics, transcriptomics, and metabolomics, will progressively permeate all aspects of Amgen's business, including clinical trial design, safety pharmacology, pharmacokinetics, drug metabolism, and regulatory and commercial strategy."

Dr. Khera said his clinic at the MGH Center for Genomic Medicine is launching the first clinical test that would assess both monogenic and polygenic risks for heart disease this month. "Anybody who comes into our clinic will be able to find out their risk at an early age—even from the time of birth. And based on that result, we can work together to come up with screening, treatments, and lifestyle recommendations to really empower individuals to overcome any inherited risk we identify."

A similar approach, applied to a broad spectrum of human diseases, could enable companies like Amgen and whole societies to adopt a true predict and prevent approach to health care.

MORE STORIES
View All
In a First for Industry, Murielle Veniant-Ellison Honored With 2022 Havel Lectureship 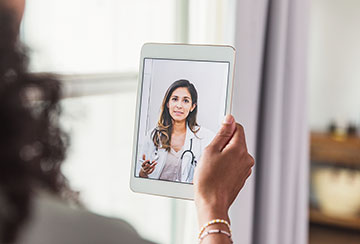 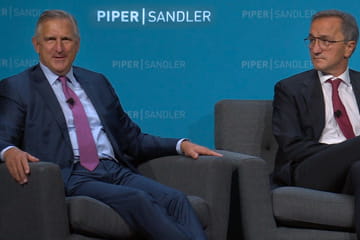