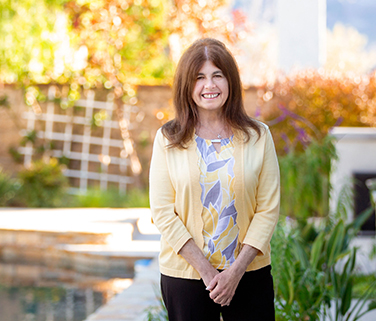 As a scientist in early development, Jane Parnes has helped guide clinical research for many of Amgen’s investigational molecules, including tezepelumab, which she began working on in 2006, just two months after joining Amgen from Stanford University.

Jointly developed by Amgen and AstraZeneca, tezepelumab is currently under investigation for patients with severe asthma.

In a Q&A, Jane Parnes describes her 14-year journey with tezepelumab, an investigational potential first-in-class TSLP-inhibitor currently in phase 3 trials for severe asthma.

As a scientist in early development, Jane Parnes has helped guide clinical research for many of Amgen’s investigational molecules, including tezepelumab, which she began working on in 2006, just two months after joining Amgen from Stanford University. Tezepelumab is an investigational potential first-in-class medicine designed to block the action of thymic stromal lymphopoietin (TSLP), an epithelial cytokine that plays a key role across the spectrum of asthma inflammation.

Jointly developed by Amgen and AstraZeneca, tezepelumab is currently under investigation for patients with severe asthma, and the latest clinical data from the phase 3 (NAVIGATOR) trial will be announced at the 2021 annual meeting of the American Academy of Allergy, Asthma Immunology.

We sat down with Parnes, Amgen’s executive medical director of Early Development, to find out why TSLP is an important pathway for patients with asthma, how having a father with asthma has influenced her work, and her experience as an integral member of the program since it began.

Were there any early inspirations in your life that led you to a career in science?

Growing up in Long Island, NY, I thought I wanted to be a doctor as early as elementary school, but it was my sophomore year of high school when a fantastic biology teacher really put me on my path. He recommended I participate in a National Science Foundation-sponsored summer program at Syracuse University, where I got my first introduction to molecular biology. I was invited back the next year to do research in a genetics lab, and those experiences led me to become both a clinician and a researcher. After my residency, I did postdoctoral research at the Massachusetts Institute of Technology before moving to the National Institutes of Health to conduct molecular immunology research. Then I took a job at Stanford University, where I did immunology research while seeing rheumatology patients.

What brought you to Amgen, and how did you get started on tezepelumab?

I was a tenured professor at Stanford, so I wasn’t really looking to change careers, but when Amgen offered me the opportunity to do translational work [translating pre-clinical science into clinical studies for human patients], it was more intriguing than any other role I’d seen in industry. I came to Amgen in August 2006 while taking a leave of absence from Stanford, and I’m still here! TSLP was being studied by Amgen scientists in Seattle; they were the first to clone and study the gene. The TSLP protein had very interesting properties considered to be important for asthma, and I joined the tezepelumab program as soon as it became a product team, just a couple months after I arrived.

Do you have any friends or family who suffer from asthma that motivated your work on this?

My dad had asthma, so I was really excited to work on a program for a disease that he had. He has since passed away, but I started working on this when he was still alive, and he was happy that I was working on asthma as well. It has certainly been motivating to advance the science for patients living with a disease that has impacted my family.

What is TSLP and how does it play such an important role in diseases like asthma?

TSLP is a cytokine that gets released by epithelial cells, including those in the lungs, in response to many of the types of stimuli that lead to exacerbations of asthma, such as viruses, allergens, smoke or other pollutant particles. This cytokine is something we call an alarmin, because it alarms the immune system about danger from the outside. A lot of biology research was being done on that pathway, and it looked like a terrific target because it sits upstream from a number of cells and cytokines involved in the asthmatic response.

Are there other innovations on the horizon that you're excited to be part of?

I love that I can continue contributing to this program—that’s not usually the case for people who work in early development—and I’m anxious to see its potential in other indications. I’m also Amgen’s therapeutic area head of Early Development for General Medicine, and I’m very enthusiastic about many of our other programs. I have loved working on tezepelumab, and my heart will always be with this molecule, but I’m thrilled to have the opportunity to help advance our exciting early cardiometabolic and inflammation programs. 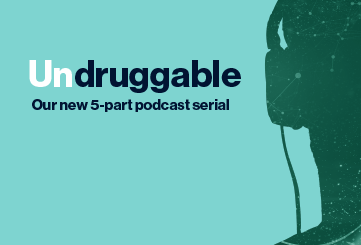 Introducing Undruggable, a New Serial Podcast from Amgen R&D Exploring how Multispecifics can Usher in the Next Wave of Drug Discovery
A Special Edition of Innovation2, brought to you by David and Jim Reese (Brothers2)