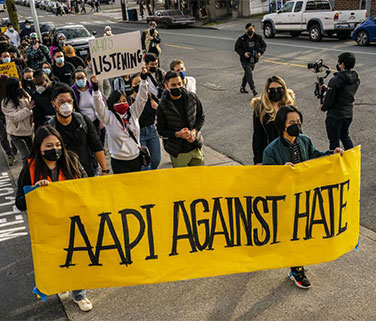 The Power of Affinity

Raised in Simi Valley, California, Brian Phan never considered himself anything but American. In the past year, however, he’s come to embrace his Vietnamese heritage. “I feel empowered and proud to say, ‘I am an Asian American,’” says Phan, senior associate of Diversity, Inclusion & Belonging. “I always knew I was, at a skin-deep level. But now, I feel it.”

In a year that saw a 2900% increase in hate crimes against Asian Americans,1 Phan’s choice sounds ill-timed. But he’s hardly alone. Thousands of the 22.8% of Amgen’s workforce who identify as Asian American or Pacific Islander (AAPI) are proudly celebrating their heritage this month, some for the first time. Because many, like Phan, have come to realize in the last year that the best way to overcome adversity is through affinity.

With the roll-out of the COVID-19 vaccine earlier this year, the worst of the pandemic seemed behind us. Not for the AAPI community, however: in mid-March, a gunman took the lives of six Asian-American women in Atlanta, Georgia. The shooting was reported to be the most violent of the 3,000 anti-Asian attacks recorded since March 2020 by community groups such as Stop AAPI Hate—way up from the 100 or so incidents reported in prior years.

Amgen professionals were deeply affected, as their Instagram posts reveal. Yet along with the hurt and fear, these staffers also expressed newfound pride in their heritage and empowerment from the solidarity they enjoyed as members of the 21-million strong Asian American community—feelings, Phan says, that are typical of his first-generation peers. “We were pressured to assimilate, which distanced us from our culture,” he explains. “But since we thought of ourselves as Americans, we didn’t adopt our parents’ cultural tendency to be submissive or silent. We know we belong, and we feel entitled to speak up. Because we know that’s the only way things are ever going to change.”

The Amgen Foundation recently awarded a $250,000 grant to support Stop AAPI Hate, a reporting and resource center which is fiscally sponsored by the nonprofit organization Chinese for Affirmative Action. This center tracks and responds to incidents of hate, violence, harassment, discrimination, shunning and child bullying against Asian Americans and Pacific Islanders in the United States.

Phan has found his voice through Amgen Asian Association (AAA), the 680-member employee resource group. When he joined three years ago, it was simply to expand his social network within Amgen. But during the pandemic, with new leadership, AAA took on new salience for Phan.

A recipe competition, among other cultural events that AAA held remotely, revealed to him not only the multiple cultures within the AAPI community, but also his own. “For many of us, food is what connects us to our culture and sense of identity, because our favorite recipes are those we grew up with, that our mother or some other relative taught us to make,” Phan says, citing his own fondness for Bò Lúc Lắc, which loosely translates as “shaken-up beef.”

As reports of anti-Asian hate crimes surged this February, however, AAA mobilized. On March 2, to raise awareness within Amgen, AAA posted on the company's internal social media platform and sent an email message that inventoried recent attacks in the outside community as well as resources available to Amgen staffers. On March 22, following the Atlanta spa shootings, AAA organized for members two remote counseling sessions with Lyra, Amgen’s mental health partner. At the same time, AAA executive sponsor and senior vice president of Corporate Affairs, Judy Brown issued a memo from senior leadership acknowledging the anti-Asian violence and making a stand of solidarity with Amgen’s AAPI staff. Executive vice president of Human Resources, Lori Johnston also personally acknowledged on LinkedIn the experiences of hate shared by Asian Americans on CNN.com. On March 23, AAA hosted a webinar featuring Chris Davis, vice president and Global Security Officer at Amgen, who offered tactical tips and practices on how to remain safe both on and off campus. More than 800 staffers attended. Another 650 tuned in on April 13, when AAA convened Congresswoman Grace Meng and Stop AAPI Hate co-founder Cynthia Choi for a virtual meeting.

As both an organizer and participant, Phan has found these events hugely empowering. “We can speak our minds, not just in the workplace, but in this environment,” he says. “And that hasn’t always been the case for Asians in America.”

AAA has a lot more in the works. The employee resource group has invited the Federal Government Affairs team to share how Amgen works with the Congressional Asian Pacific American Caucus on policies that address diversity and inclusion, as well as, inequities in healthcare that impact the AAPI community. As part of its push for healthcare equity, AAA is also committed to working with the Amgen Black Employee Network (ABEN) and the Representation in Clinical Research (RISE) program in broadening AAPI representation in clinical trials.

“How do I make you powerful to the business? In a way that you want to be empowered?” he asks. “How do I open that opportunity for you, so that you feel you’ve accomplished something important at the end of the day? That’s where I think we can really tap the power of our affinity to make a difference.” 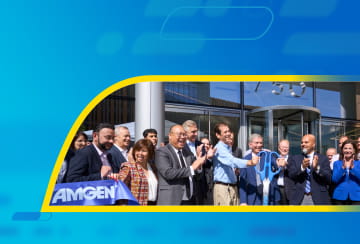 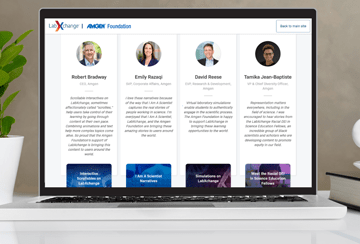 Unwrap the Gift of Science with Amgen Leaders 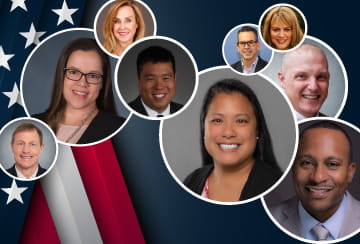