Single-cell sequencing keeps proving its value as a new tool in cancer research, and Amgen is looking to apply the technology to other diseases. 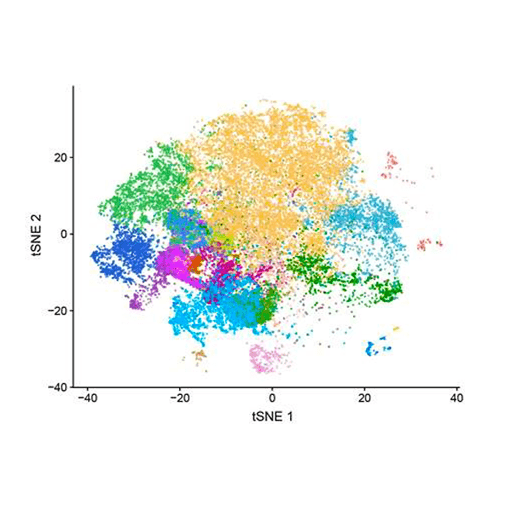 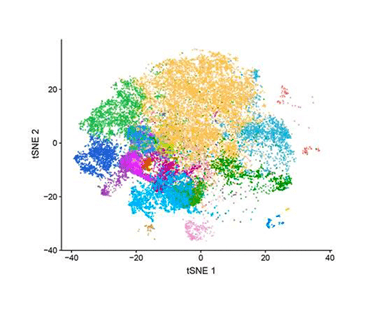 Single-cell sequencing enables researchers to identify the various cell subtypes found in and near a tumor and visualize the relative sizes of these cell populations in colorful scatter plots, like the one above.

When you’re looking at towns on Google Earth, you often learn more about a place by exploring it in Street View than by looking at satellite photos. In much the same way, scientists are learning much more about cancer through a new tool that provides a close-up look at immune cells found in the neighborhood of a tumor.

The technology, called single-cell RNA sequencing, can be used to probe thousands of cells taken from cancer patients. It can tell researchers which subtypes of immune cells are in or near a tumor, and which genes are switched on or off within these cells.

Just as Street View can show if houses and shops are well-maintained or run-down, single-cell studies can distinguish a robust immune response from a tepid or counterproductive response.

In one of the largest such studies to date, scientists at Amgen San Francisco and Peking University sequenced more than 50,000 cells from 18 patients with colorectal cancer. They also looked at thousands of cells from mouse models of cancer to understand how the immune response in mice is influenced by two cancer drugs currently being tested in the clinic and then related these findings back to human cancer.

The study, published in the prestigious journal Cell1, was the third major paper to emerge from Amgen’s collaboration with the China-based team, led by Zemin Zhang. Amgen’s contribution to the research involved teamwork between scientists spread across multiple Amgen departments, including Inflammation and Oncology, In Vivo Pharmacology, and the Genome Analysis Unit bioinformatics group.

“When we started doing this type of research three years ago, it seemed very new,” said Wenjun Ouyang, executive director, Research. “Now the whole field is exploding with activity. I think our scientists are still on the leading edge of this research because we began this work earlier. We also have very talented people, like Xin Yu and Jackson Egen, who are showing the world how to use single-cell studies to answer important questions.”

How tumors can thwart a new treatment

The immune system includes a mix of attack cells, such as T cells, that fights threats like viruses and cancer, along with regulatory cells that control our immune artillery to prevent harm to healthy tissues. But in some cancer, immune regulatory cells like macrophages can actually make cancer worse by suppressing T cells and sending out signals that support tumor growth.

A key question in the Cell study involved test drugs designed to rein in macrophages by blocking a receptor called CSF1. Under normal conditions, this receptor works like an on-switch to activate macrophages and expand their numbers, so blocking it should produce the opposite effect. That approach hasn’t worked well in cancer, for reasons that aren’t clear.

“CSF1 receptor inhibitors haven’t shown a lot of activity against cancer in the clinic, both alone and in combination with immune checkpoint inhibitors,” said Jackson, a director in Oncology Research. “In this study, we were trying to understand potential resistance mechanisms that might decrease the activity of this therapeutic approach.”

Analysis of individual macrophages that develop within a tumor identified a new subtype of this cell that is both tumor-friendly and unaffected by drugs that block the CSF1 receptor.

“Other papers have hinted at the idea of resistant macrophages, but these mechanisms have never been defined at the level of detail we achieved with this technology,” Jackson said. He added that these deep insights “definitely suggest new strategies for targeting macrophages with the potential to show more benefit in the clinic.”

The immune system’s dendritic cells can also fight cancer by helping T cells to recognize tumor cells and attack them. However, test drugs designed to boost the activity of dendritic cells have also had limited success to date. “But they do show some signs of activity in the clinic, so people are still very interested in this approach,” said Xin, a senior scientist in Oncology Research.

The single-cell data identified a promising subset of dendritic cells. When these particular immune cells were mobilized by a test drug called a CD40 activator, they launched an effective immune response to the tumor. The findings suggest that a CD40 drug “could increase the response rate of patients to checkpoint inhibitors or turn a non-responder into a responder,” said Xin. The results also point to new biomarkers that could help to identify patients that might benefit from this approach.

Implications that go beyond cancer

Wenjun noted that in the three years since the first Cell paper was published in collaboration with the Chinese research team, Amgen has established a strong internal capability in single-cell RNA sequencing. “Many Amgen drug discovery teams are now using this technology in their programs. We are building our own strengths in the bioinformatic analysis you need for this type of research.” In addition, the established Amgen postdoc program also helped to enable this type of cutting-edge research. “We had two postdocs actively participated in this study. Katarzyna Skrzypczynska, a postdoc in Jackson’s lab, is a co-first author on this paper. Aaron Rapaport, a postdoc from my lab, also made important contributions to this study,” said Wenjun.

The richness of data provided by single-cell studies “has huge implications across our therapeutic pipeline,” said Jackson. That includes even well-established technologies, like the BiTE® (bispecific T cell engager) platform that Amgen has pioneered. “We are applying single-cell sequencing to better understand how our BiTE molecules can change the gene expression and activation of T cells, as well as the effects these molecules have on the tumor environment.”

While single-cell studies have focused mainly on cancer and cancer therapies to date, the technology’s potential goes much further, said Flavius Martin, vice president, Oncology and Inflammation Research. “The whole world is using this to try to understand disease mechanisms better to improve target discovery. The sequencing itself is still expensive, but the costs are coming down and the technology is being commoditized. The real success factor now is good progressive biology. Companies like Amgen who have smart biologists will be able to ask the big questions and get ahead.”

Some of the biggest questions come down to how disease is defined, diagnosed, and treated. “This tool will revolutionize diagnostic and biomarker work and help us to define different disease more precisely,” Flavius said. “Many human diseases are actually syndromes, or collections of symptoms. They may be known clinically as one disease, but a lot of them are quite diverse in their molecular mechanisms. That’s why you often see differences in how patients with the same disease respond to therapies, because there is actually a lot of heterogeneity in how diseases are generated.

“The single-cell technology will allow us to understand that better, and cancer is just the tip of the iceberg. We are already broadening its reach into autoimmunity, and we can use it to go deeper into other diseases as well.”